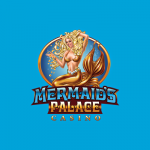 There wasn’t any specific reason why I joined Mermaid’s Palace casino, I simply loved the name of it and it didn’t have a bad rank on askgamblers. It’s based on betonsoft software and I don’t have anything bad against them.
I played there once recently and made a 20? I mostly played only slots. My favorites were Minted Sevens slot. It is very similar to 7’s and stripes slots, well, the look of it. This slot gave me good winnings, better than other casinos with similar slots and that is surprising because it has only 3 reels.

I also played Sweet Success, it is a great 50 payline slot. I played it for a long time and almost every second spin gave me winnings but unfortunately within lots of spins the biggest winning was less than 1? I couldn’t free spins (all the time I got only 1 free spins or 1 wild symbols feature so it didn’t mean anything).

I guess my favorite game was Gems and Jewels. I think I’ve played it somewhere before but this game gave me the biggest winnings than the previous ones, because it has both multiplier features and free spins. Each spin, and I’m serious, gave me winnings. I hit free spins feature and received 10 free spins from which only few were empty.

As a fan of table games, I took a look at Mermaid’s Palace table game offers. I played European Blackjack. Well, I have to say that table games I would rather play in another casino, maybe because I’m just used to the design that Playtech and NetEnt has.

Overall I liked this casino and I think I will deposit there again. I think it is trustful because later I made a withdrawal and it was in my ewallet the next day and I didn’t have any technical or other problems with this casino, the games loaded quickly and I was pleased. The design of the games is simple but cool and in this case the simple-the better works. I recommend Mermaid’s palace.